Lower Division (AA, A and T-Ball)*

Introduction to the game using wiffle balls in a non-competitive division.

Introduction to the game in a non-competitive division.  Emphasis is playing on a team in a fun, low-key environment. Players age 5 MUST play in the T-Ball level. The maximum eligible age for T-Ball is 6. The division is divided into two groups, T-Ball 1 and T-Ball 2.

o    T-Ball 1 is for players who are league age 5 or are playing their first year of baseball.

o    T-Ball 2 is for players who are league age 6 or are returning players.

Single A is for players age 7 or 8 who are prepared for the next level of play. The division is "coach pitch". Players at this level begin to regularly make routine plays in the field and can consistently hit a thrown pitch.  The focus is on enjoying the game while learning and developing baseball skills.

AA is half "coach pitch" in the first half of the season and "kid pitch" is introduced in the second half of the season.  Players at this level must be minimum league age 8. This is the last non-competitive level and prepares players for the AAA and Majors levels. Players at this level consistently make routine plays in the field and begin to understand some advanced concepts. Some players will repeat this level to gain more skills before advancing to AAA. AA players are eligible for post-season play. AA post-season is pool play format followed by a championship bracket (all teams play).

AAA is the first competitive draft level for players 9-10 (League age 11 players are allowed under board discretion and who have had only 1 year of AAA.) Players play using the standard little league rules and the game is fast moving. Steals are permitted (no leads) and players may begin to specialize in positions. AAA players are eligible for post-season play. Tryouts and a AAA Draft will determine if the player is selected for this division.  Most players are expected to play 2 years of AAA before moving on to the majors division. AAA post-season is a double elimination bracket based on team rankings from the regular season (all teams play in the playoffs). Following playoffs, players are eligible to be selected onto post-season all-star teams. Note: Under special exception, League Age 12 players who have had no baseball experience may be requested to play in AAA. District 52 and FCLL President approval is required for this exception.

Majors is the highest level in Little League baseball with the opportunity to travel to Williamsport, PA to play in the Little League World Series for the Regional championship team or play on the Cooperstown Team playing a 100+ selection of teams from around the country. Play is more competitive including steals (no leads), dropped 3rd strike and tag outs scoring. The program is to develop players skills, maturity, knowledge of the game and baseball strategy/IQ. Tryouts and a Majors Draft will determine if the player is selected for this division. League Age 10 players are allowed to try out for majors if they have 2 years of AAA experience. Majors post-season is a double elimination bracket based on team rankings from the regular season (all teams play in the Playoffs). Following playoffs, players are eligible to be selected onto post-season all-star teams. The Cooperstown team is filled from selected Majors players (typically LA 12 but younger players can also try-out) and managed through a separate registration and try-out process.

The Juniors Baseball Division is designed for players graduating from the Little League system with advanced baseball skills, maturity and desire to play with a complete set of Junior/Senior baseball rules.  Juniors Division plays on either a 54' pitching/80' base paths or a full size (conventional) baseball field using a 60-foot 6-inch pitching distance and 90-foot base paths. The players will be permitted to "lead off" bases, runners may attempt to steal at any time, and allowing an on-deck batter. It offers the highest competitive level of baseball during the regular season for advanced players. This division will be structured for league age 12-14 year olds. League Age 12 players must try-out for selection onto the Juniors team. The Juniors team plays other teams around the region and will also participate in a post-season playoff tournament. 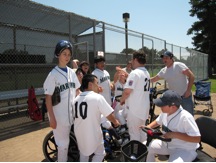 The Challengers Division is an extension of Foster City Little League.  Children with all disabilities and abilities have the opportunity to interact in a rewarding environment.

Children who require or prefer assistance may have a buddy to help them in learning the game of baseball.  They will have the opportunity to bat and run the bases and play different positions in the playing field just like the Majors.

Enjoy the amazing sound of the parent’s cheers as the kids hit the ball, make great plays in the field & throws to first base.

The children will meet new friends and enjoy having fun at the same time.  There is always a team cheer at the end of each game to show our appreciation to the other team.

The environment is hard to describe in words. You have to be there to experience the thrill of your child learning the game of baseball and hearing the encouragement of the parents.  Foster City Little League provides this opportunity for all kids, in all cities, with all disabilities FREE of charge.  Each player receives a full uniform along with a season schedule of games.  The season usually consists of a game every Sunday afternoon except for Holidays.  These games last about an hour and a half depending on how many kids show up from each team.  Everyone plays, everyone hits, and EVERYONE has fun.  Please come and join us this season.  We look forward to showing you a GREAT time.  If you are interested in signing up please contact Jason Louie at jlouie@fcll.org. See you on the field!